Back in October all of the Year 12’s took part within their chosen teams, to compete in the National Skills Challenge. The Inspirational Learning group working in association with the digital Institute London and Staffordshire University create this real-life business challenge. This year the challenge was set by Sports Interactive on behalf of Football Manager to develop a new marketing campaign to extend the appeal of Football Manager to a younger audience. Students had to work together to create a campaign that would make this game appeal to 13-21 year olds.

The winning team from the day then went on to further develop their idea and compete in the national final alongside Year 12 & 13 students from schools and colleges around the UK, with the chance of winning a summer internship at HereEast working with some of the UK’s top game design companies.

Due to the circumstances, this live event had to be done virtually which meant that the team had to really overcome and adapt the way that they presented the final pitch that they had been working on. This meant having to record each section of the pitch separately but then bring it all together for the final submission. There was a long anxious wait to hear who had snatched the title as the entries were all of a high standard.

The wait was finally over when on the 7 July the announcement on Twitter declared HGSS “One Team One Dream” the winners. 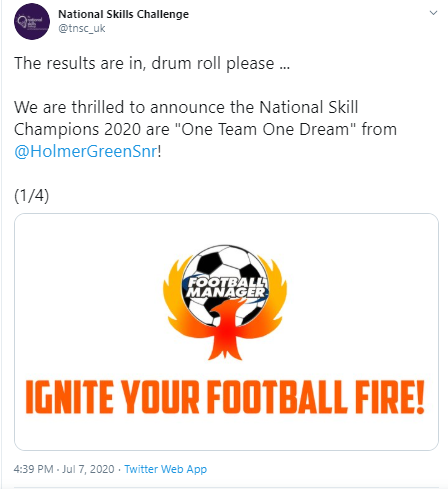 The feedback I received was that they were really impressed, feedback from the judges at the Digital Institute London below...

I would like to add my huge congratulations as I know how much hard work, determination and resilience the whole team showed working together and so pleased that this year they can say “We did it”! I am sure that the ideas they showed will become a marketing campaign of the future and they should all be extremely proud of what they have achieved in addition to being great role models for the younger years. Well done to the finals team: Gracie Brodie, Jack Eaton, Cara Duggan, Evie Swatton, and Hannah Taylor.